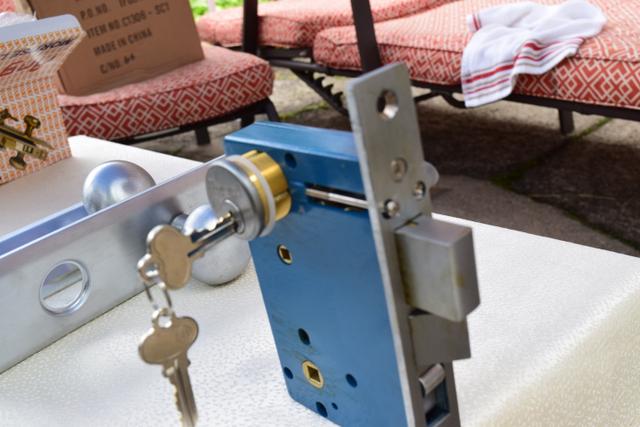 There are many locks today that you can use to buff up your security; with us becoming more and more tech-savvy we have invented a few brilliant locks. Biometric locks, electronic locks, and key card locks are just a few of the latest innovation in the locksmith industry. We at Locksmith Queens INC will keep you up to speed.

There is a saying, basic is best, and it couldn’t be truer. We have not forgotten the most basic, simple kind of locks that add the perfect addition of security to your house or office. You might have heard of a lock called a Mortise Lock. A Mortise Lock is a lock widely used throughout America and Europe. We have provided this brief article to explain to you exactly what is a Mortise Lock. From a few historical facts to how to install it, Locksmith Queens INC has got you covered.

What Is a Mortise Lock

Mortise Locks first appeared like a lock mechanism in America in the second quarter of the 18th century. In these early forms, the mortise lock mechanism was combined with a pull to open the unlocked door. Eventually, pulls were replaced by knobs.

Until the mid 19th century, Mortise Locks were only used in formal rooms in the most expensive houses. Other rooms used box locks or rim locks. One could say that Mortise Locks was exclusive to the high-end class of society. As time passed by, Mortise Locks became more accessible to everyone and has since become a staple in the locksmith market.

So what is A Mortise Lock? A Mortise Lock is a lock that requires a pocket, in other words, the lock is cut into the door itself or a piece of furniture, which the lock is then fitted. Mortise locks may include a non-locking sprung latch operated by a door handle. Such a lock is termed a sash lock. A simpler form without a handle or latch is termed a deadlock. Deadlocks are commonly used as a secure backup to a sprung non-deadlocking latch, usually a pin tumbler rim lock.

In most places of the world, Mortise Locks are generally found inside older buildings which have been constructed before the appearance of cylindrical locks. Mortise Locks still commonly use lever locks as a mechanism. Older Mortise Locks may have used warded lock mechanisms. In recent years, the Euro cylinder lock has become common, using a pin tumbler lock in a mortise housing.

Almost anybody can install a Mortise Lock with the proper knowledge, tools, and method. In other words, it is more than possible for the average homeowner to install this lock by themselves.

If you are inexperienced in Mortise Lock installation, we suggest you use a Mortising Jig. A Mortising Jig is a tool that helps you make a precise cutting of the pocket a simple operation, but the subsequent installation of the external trim can still prove problematic if the installer is inexperienced.

The Difference Between Mortise Lock and a Bored Cylindrical Lock

On the one hand, the installation of the Mortise Lock weakens the structure of your typical timber door, but on the other hand, a Mortise Lock is stronger and more versatile than a Bored Cylindrical Lock, both in external trim and functionality. Whereas the latter mechanism lacks the architecture required for ornate and solid-cast knobs and levers, the mortise lock can accommodate a heavier return spring and a more solid internal mechanism, making its use possible. Furthermore, a Mortise Lock typically accepts a wide range of other manufacturers’ cylinders and accessories, allowing architectural conformity with lock hardware already on site.

We at Locksmith Queens INC in Queens, NY have made a list for you with the most common manufacturers for Mortise Locks in America. This list isn’t followed by any specific order. One manufacturer might better suit your needs than another, that’s is why you should check exactly what works for you best and afterward decide.

How We Can Help you

Locksmith Queens INC is a locksmith company that has worked with countless individuals and thousands of companies. We can provide you the 360-degree service you seek, and provide you with a sure-fire security plan for your business.

Get your Mortise Lock now! Call (212) 203-6021. For more information, you can check our website: Locksmithqueensinc.com. If you have any further inquiries, you can send us an email, and a professional representative from our company will connect with you. You can send it to the following email:Locksmithqueensinc@gmail.com. We look forward to hearing from you soon.

WE ARE 15 MIN AWAY IN THIS NEIGHBORHOODS